Everybody Has a Story: Michael Martinez 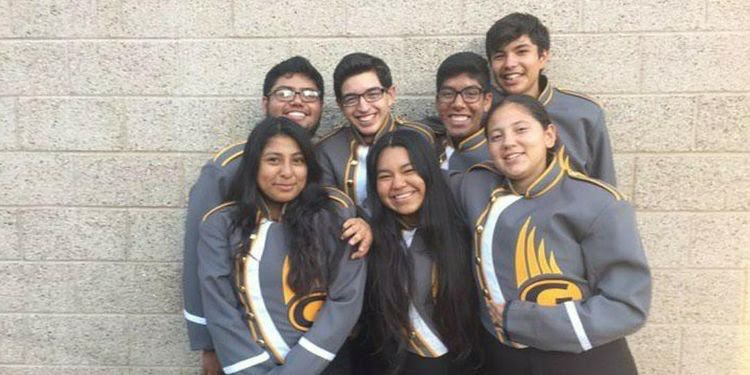 Senior, Michael Martinez (top center), poses alongside fellow marching band members as they celebrate the end of a successful season with a photoshoot during his junior year.

In second grade, Michael Martinez failed his Gifted and Talented Education (GATE) exam. With a belief in his potential and the urge to see him succeed, his teacher, Maureen Elstead, from Glenn L. Martin Elementary, single handedly fought for his inclusion into the program. Martinez was then accepted into the program, which he believes changed his life forever.

Martinez attributes this small moment from many years ago as the reason for why he is where he is today. Through joining the GATE program, he was able to surround himself with other top students and was encouraged to challenge himself both academically and personally.

In general, Martinez sees himself as a product of both his experiences and the efforts of those around him–like a mosaic made of dozens of distinct, yet shining parts.

As the oldest sibling in a family of six, Martinez holds various responsibilities aside from school, such as doing most of the chores around the house or watching over his three younger siblings. He regrets not being able to spend more quality time with his family as he struggles to keep up with his busy schedule as a senior, a music student, and a podcast host.

“With high school, I’ve kind of kept to myself, especially with it being online and everything. Like most of my days are at my desk in my room, kind of doing my thing,” Martinez explains.

At Godinez, Martinez is heavily involved in music, being a part of the wind ensemble as first chair clarinet, marching band, and zero period jazz band. He holds a leadership position as clarinet section leader and holds meetings every Thursday to help his section members.

His passion for music was inspired by his mother, who also played the clarinet when she was younger. What Martinez enjoys most about being in the music program is the community and the bonds he’s formed over the years.

“You really develop close relationships with everyone there, especially Mark Santos, the band director. He’s really close with his kids and always trying to make us feel like we belong there,” said Martinez.

Apart from being in band, Martinez also hosts his own podcast on Youtube called On My Mind alongside his best friend and fellow senior co-host, Ariel Bernabe. The pair began recording their podcast back in May of last year as they found themselves with lots of free time due to the pandemic and online school. On the podcast, they’ve interviewed students and former alumni as well as teachers about different subjects such as world events, games, and other life topics.

Although Martinez began his podcast out of boredom, he’s grateful for everything it has taught him. It proved to be a lot of work, and he often spends several hours a week recording, editing and uploading his videos; however, he’s enjoyed the experience more than anything else.

Through his podcast, Martinez improved his communication skills through constantly speaking and interacting with others, and learned how to edit and create engaging content that he has fun producing.

Martinez said, “I’m kind of glad that I did start it because it’s been one of the best things in my life in the past year, you know, when everything was just so wack.”

With five AP classes, a podcast, and other clubs to manage, Martinez likes to keep himself on track by organizing all his tasks in an agenda, which he fills with all his daily homework and plans for the day. To motivate himself and help him concentrate in a noisy home, he also likes to listen to music.

“The goal is to just get the most important and immediate things done. So, just kind of staying organized and finding the motivation. Using my earbuds, my agenda, and just my own self determination to really get things done. You know, priorities,” added Martinez.

Being a senior, Martinez also had the responsibility of applying to colleges this year. Through the program Questbridge, which seeks to help lower income students attend and afford college, Martinez received a full ride scholarship to Bowdoin College in Maine, where he plans to study computer science in order to become a software engineer.

For this achievement, he is grateful for his counselor, Matthew Hall, whose roster of students are with the last names L-O, because he helped through every step of the long process.

Winning a Questbridge scholarship is no easy feat. There are several applications, personal statements, essays and financial aid forms that students must complete. In 2020, out of 18,500 applicants, only 6,885 students were selected as National College Match Finalists. Both Martinez and Hall worked several hours in order to develop a strong application.

“The Questbridge application is extremely time consuming, both for the student and the counselor. As it coincides with college application season, extra time is one thing nobody has,” explained Hall.

Despite the challenges and the many long hours, Hall was confident that Martinez had a chance. When Martinez received his acceptance in December, he felt elated to see one of his students receive such a life changing opportunity.

“In my multiple conversations with Michael over the last four years, I have full confidence that he will represent Godinez in the best light. His goal is to change the world through technology, and I know getting this scholarship gives him the head start he deserves,” said Hall.

As he prepares to graduate from Godinez and begin a new chapter in Maine at Bowdoin, Martinez feels thankful for everything–from the memories he made, to the friends he found, to the fantastic teachers he had at Godinez.

To Martinez, Godinez Fundamental High School represents a place that allowed him to discover himself and what he wanted for the future.