The Fight Against Asian Hate 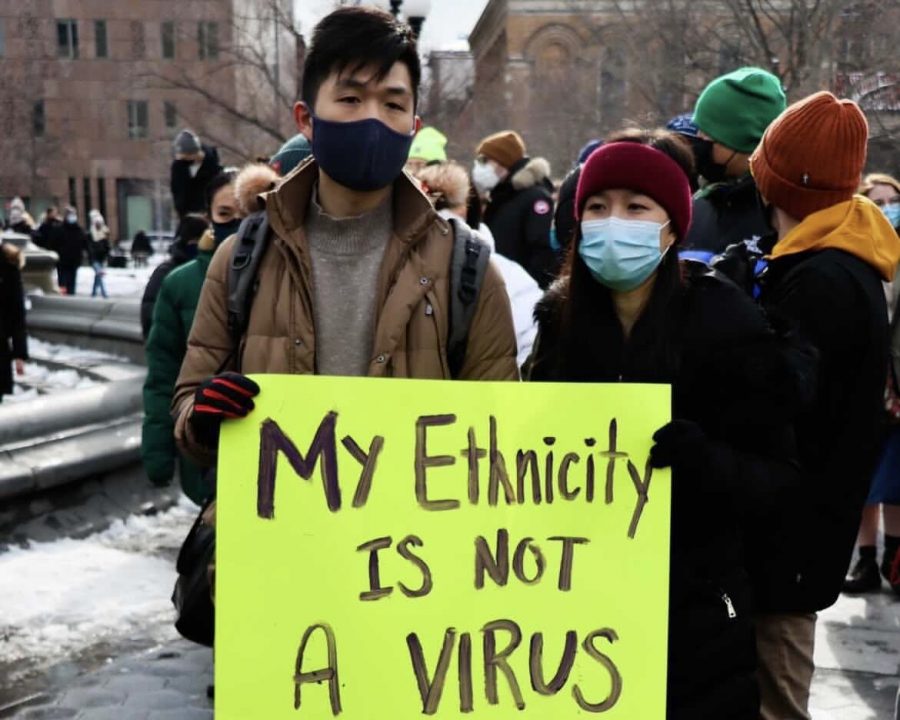 Photo courtesy of @armanilens on Instagram, who was at the rally that day and took this photo.

People protesting and holding up signs at Washington Square Park for the Asian March Against White Nationalism. Photo taken on February 20, 2021.

2020 was a year for countless disasters, misfortunes, and violent cases. After countless hate being thrown at indigenous people, Asians are being attacked as well.

Major cities in the U.S. have experienced an increase in the number of Asian hate crimes since the start of the COVID-19 pandemic. The rise in hate has affected Asians of different ages but has been most noticed towards the elderly. Videos of security camera footage and videos taken as evidence of assault have been circulating around the internet and are leaving everyone furious.

“We should stop Asian hate because it’s common sense, no one should be hated because of their race, it’s pretty idiotic,” said Godinez Fundamental High School sophomore, Adriana Estrada.

In Orange County there has been a plethora of hate crimes against Asian Americans.

Linda Nguyen was visiting an Orange County Target to do some errands when she faced injustice.

The couple behind her in line began to cough. “Then they said, ‘Stay away from her. She has coronavirus,” Nguyen said. She went on to say, “It was emotionally painful and it was embarrassing. I went in my car and cried for 45 minutes, just in shock, and couldn’t believe that it happened to me.”

Although the attack was not physical, Nguyen was left hurt.

This is just one of the many Asian hate crimes that have taken place within the past year.

Hate towards Asians has been around long before the pandemic started, however, the increase in cases seem to have relation specifically to the pandemic. One contributing factor is former President Donald Trump who repeatedly called the coronavirus the “Chinese Virus.”

He pointed the finger at the disease and shifted the blame onto innocent Asians. This has led to an uprise of racism and xenophobia towards Asians.

And it is not only ordinary people who are causing hate, but cops as well.

Angelo Quinto, a 30-year-old Filipino Navy veteran, was attacked and killed by two police officers from the Antioch Police Department who knelt on his neck for nearly five minutes. His mother, Maria Quinto-Collins, recorded the incident which was later posted onto the internet and gained a lot of attention.

It was nearly identical to the death of George Floyd who also died from a knee on his neck because of a racist and brutal cop, The Antioch Police Department has not released the names of the officers involved and Quinto’s family filed for a legal claim because they believe he was killed wrongfully at the hands of police. Similarly to Floyd, he was in no way physically resisting, yet, still killed because of an unnecessary amount of force.

One of the most horrible videos of attacks on Asians has been of Vicha Ratanapakdee, an 85-year-old man, who was attacked and killed in his own neighborhood by Antoine Watson, 19, who lunged at him causing him to fall abruptly to the ground. He died two days later because of a brain hemorrhage.

Many other elderly Asians are experiencing hate towards them while walking home, at the store, and even walking down the sidewalk.

A young Asian-American girl was stabbed at Midland Sam’s Club in Texas by Jose L. Gomez, 19-year-old boy, who attempted to murder her and the rest of her family because he “though they were Chinese and infecting people with coronavirus.” She was only 2-years-old, and her sibling 6-years-old.

More incidents like this that have been recorded are being shared online to spread awareness on Asian hate.

The movement created, Stop Asian Hate,  has been shared to stand up to the assaults and fight for equality. Protests, such as one in Manhattan, New York, fight against these attacks and communities, such as stopaapihate, were made to spread awareness on this issue.

Numerous celebrities spoke out on the issue via social media.

She tweeted, “These are my grandparents. They came to America to build a new life.”

Attached to her tweet was an image containing her father’s family when they immigrated to the U.S. from China.

Tilly went on to speak about her grandfather being a “Respected doctor in the Chinese community.” She ended her statement by saying, “America is built on the backbone of hard working immigrants. #StopAsianHate”

Godinez sophomore Andrea Millan is angry at what she sees online.

“I agree [with Stop Asian Hate] because a lot of things are influenced by Asian culture and there is a lot of Asian businesses affected by these types of things like hate crimes and overall discrimination,” Millan added, “anyone who injests Asian culture, anything from media to food, should agree that Asian hate should stop.”

In addition to the protests and hashtags on social media posts, there have been other attempts to spread awareness on this issue and find ways to help each other.

One way to help Asians who are targeted is by donating and contributing to fundraisers. By donating to people and organizations, the chances of someone affording surgeries and hospital bills can continue to increase.

GoFundMe is a good website to find multiple Asian Americans looking for help to care for their injured loved ones or to increase funds for organizations that help Asians.

Some organizations such as the AAPI Community Fund and National Organization of Asians and Pacific Islanders Ending Sexual Violence organizations are activly looking for donations to protect Asians targetted because of Covid and to protect women against sexual violence.

However, donating is only one way to support Stop Asian Hate. Another way to help Asians who are attacked is by reporting the hate incidents.

Reporting incidents on the stopaapihate website will not only spread awareness on the constant increase of hate but it will also help those families who need the support.

Many have volunteered in community groups, where you can chaperone or watch over the elderly who are at risk of being targeted. Protecting those in need can decrease the number of incidents and can even save someone’s life.

Websites such as Hollaback has partnered with Asian Americans Advancing Justice AAJC and created Free Bystander Intervention Training to teach people how to stop and de-escalate Asian harassment.

The rising numbers of Asian Hate Crimes around the world is absurd. Action has to be taken now.