A New President Brings Hope to Many

What We Want from President Elect Joe Biden

Change has come after four years of disappointment and hope is back for many Americans.

Joe Biden was Vice President under President Obama and when Biden saw where this country’s poor leadership was leading the country he knew he had to run against President Donald Trump.

President-elect Biden is taking over, to help people fight for their health, when he goes into the White House in January 2021. The country wants the new President to find a safe way to prevent more spread of the virus or stop the virus for good, for everything to go back to “normal.”

Women should be respected, no matter the situation, which applies to everybody. Men and women are raped a thousand times a year. President Trump denied after he sexually assaulted a woman and the his people defended him. President-elect Biden should speak on protecting women’s rights and find ways to stop sexual assault.

As a young female, I do have certain privileges taken away from me because my parents live with the fear that something might happen to me. I can’t stay out after 10 p.m. and I can’t go sleep over at friend’s house because she has brothers and a dad. Women should be able to have every right a man has, especially the right of freedom of speech.

In the beginning of 2020 and during the middle of the presidential election many people were fighting for their lives and rights. President Trump said, “I am not in favor of gay marriage,” “ I don’t support gay marriage,” and “I’m against gay marriage.” Most high schoolers want to be treated equally more than anything and not to be told to go back “where we came from.”

The country wants equality and acceptance from the new leader of the United States. We want to stop hearing phrases from the leader of the country, spout out, “we are going to build a wall” or “You are a rude, terrible person.” We want safety, meaning going out in public not feeling judged for who you are or going out feeling like you’re physically in danger. A leader to stand up for others beliefs.

High schoolers and many in this country all want safety, human rights, and equality from our new President. 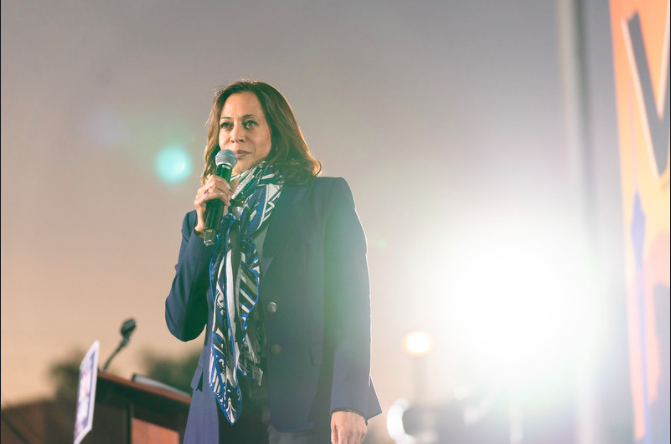 Political Duo is a Step in the Right Direction

History has been made with Kamala Harris becoming the first African American/Asian female vice president in America.

This is big for me due to the fact that I am African American. I see this as a step in the right direction when it comes to more and more African Americans being voted into different positions such as: president, vice president, mayor of their respective areas, and many more.

If anything this is an even bigger deal for women across the world who hope to be leaders of their societies one day in their own lives.

I say this because I don’t necessarily like Joe Biden that much, I just believe he was a better candidate than President Donald Trump. I see that many other people felt the same way, because as long as Trump isn’t our president anymore, the world can be a better place for both younger and older generations.

“I do not believe Donald Trump was the right choice for America in the first place,” said, my mom, Victoria Collins.

Many people had the same views as her. Many people in America including the Trump supporters who voted for him didn’t like Trump as our president considering the state our economy is in at the moment.

This is exactly why the election of Biden is a breath of fresh air for our society.

“Joe Biden is the right choice for America,” said, my dad, Robert Collins.

My father’s views of Biden have rubbed off on me, because I also believe that Biden is the president America needs. He isn’t as stubborn and arrogant as Trump.

So even though I don’t necessarily agree with all of Biden’s views and beliefs, I can somewhat sit here and tell you he is a far better president than Trump, just by the way he acts.

This is a good sign for our society, considering the fact that we need more of a leader than a dictator in today’s society. With so much of our youth looking at our leaders for inspiration, there is no space for a dictator.