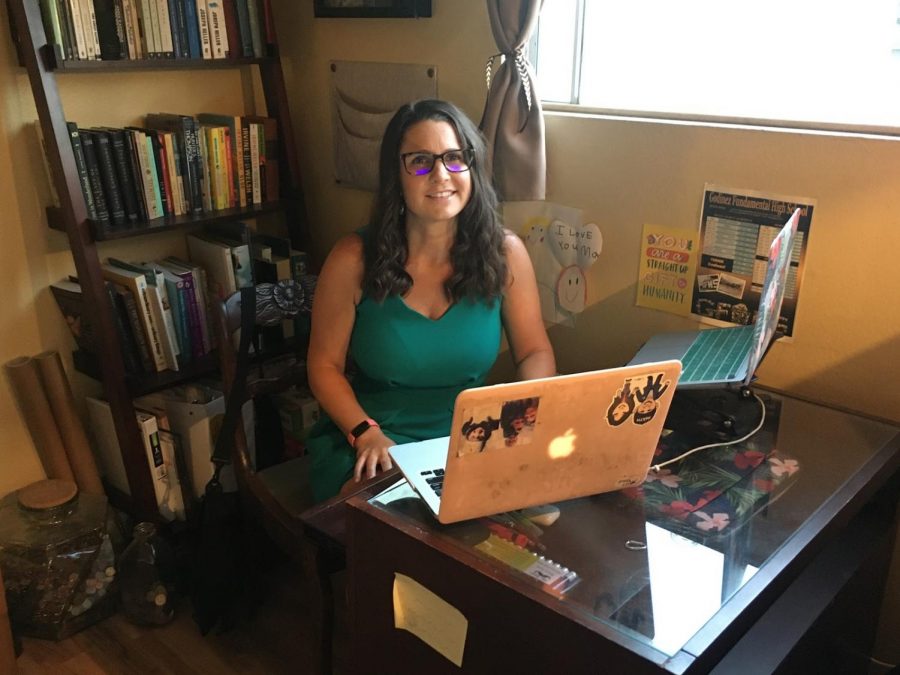 Eager to teach, AP Human Geography and AP Government teacher, Megan Blash, has her two computers out ready for her next class.

Students and Teachers Pay the Price of Online Learning

With the city of Santa Ana having the highest numbers of COVID-19 cases in Orange County, schools in the Santa Ana Unified School District (SAUSD) continue distance learning for the start of the 2020-2021 school year as a precautionary measure.

It’s been a major adjustment for both students and teachers as they organize their workspaces and open their wallets to make an engaging learning experience for SAUSD students. For teachers, the average amount spent to set up their classroom is $740. And this year, retailers expected the average family with school age children to spend a record breaking $790.

We interviewed multiple teachers and students at Godinez Fundamental High School (GFHS) to hear just how big a role distance learning has had on their wallets.

Grateful Despite the Difficulties 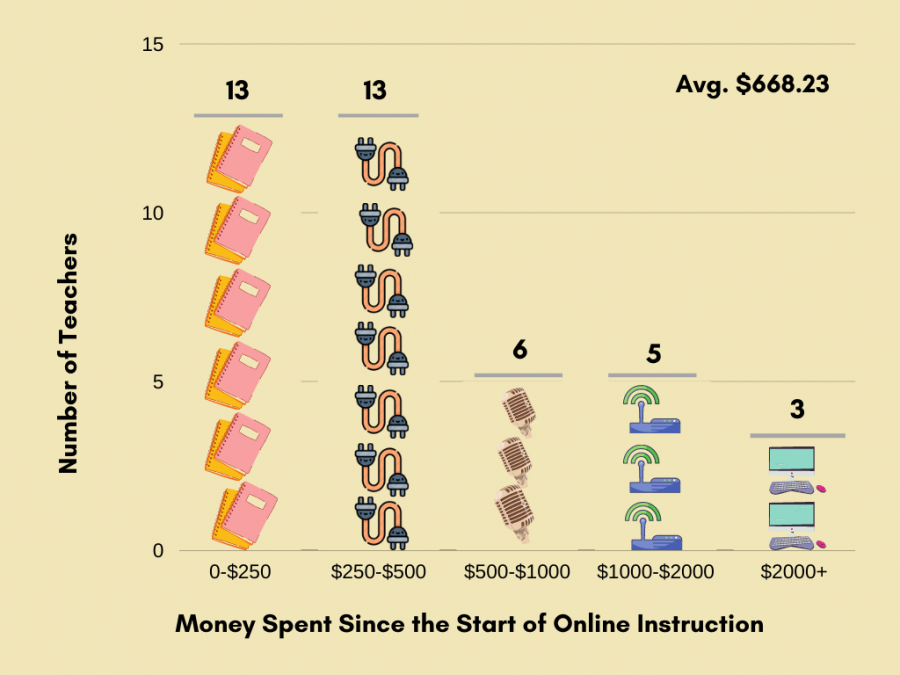 40 teachers at Godinez Fundamental High School who were polled show what they spent at the beginning of the 2020-2021 school year.

Media Design teacher Rudy Strukoff, estimates that he’s spent over $3,750 on supplies and utilities. He invested in a standing desk for his workspace, software, new modems, and a WiFi router rig with extenders.

“I had to spend extra to get the maximum broadband width for my cable, my WiFi, and my internet access. There’s that monthly increase and then the cost of all the WiFi equipment,” said Strukoff.

With a previous career as a music producer, Strukoff has several useful tools for his online classes, such as microphones, computers, and speakers. This allowed him to save some money on improving his workspace for distance learning.

“I’m a technology teacher. I’ve got all this equipment that I’ve been able to put to work again, and it’s great. It is making teaching so much more easy on this digital platform,” Strukoff said.

His supplies make Strukoff’s work experience more streamlined, manageable, and easier for him to be a teacher in this environment.

Strukoff believes he has been saving money–mostly in commuting–but that it balances out. Instead of spending $200 a month to commute from South Orange County to Santa Ana, he is using that money elsewhere.

“The savings in gas pays for my internet increase, but I’m saving money, and this is not every teacher,” added Strukoff.

Despite the expenses, Strukoff enjoys online learning because he can better organize his workspace and has flexible hours. He also feels more efficient and energized at home. But, he dislikes the lack of a connection with his students due to their poor internet connection.

“I don’t like that the kids have such low broadband that they can’t even turn on their cameras without the risk of losing connection. I don’t like the fact that I don’t see or hear my kids as much,” said Strukoff. 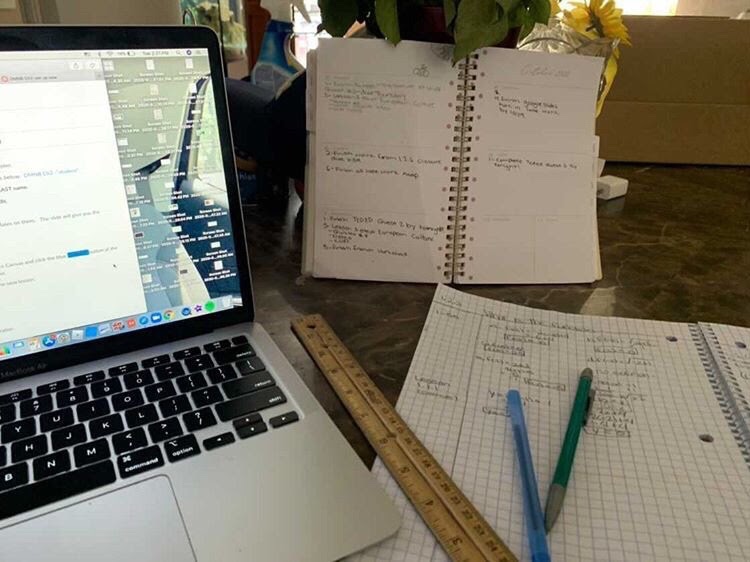 Freshman, Denise Arinaga, snaps a photo of her workspace on her kitchen table. The iMac is one of her new online learning purchases, as well as notebooks and supplies.

For freshman Denise Arinaga, online schooling is difficult because she isn’t getting the same high school experience freshmen usually get at GFHS. Although her high school career began differently, she is still trying her best to make the most out of this year. 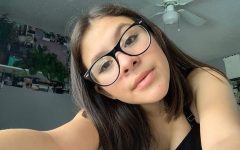 I don’t really learn much since there are so many technical issues, and teachers are going way too fast”

“One thing I miss about in-person learning is the social interaction; talking to teachers and students,” said Arinaga.

Along with the adjustment to online learning, Arinaga spent a lot on her school supplies, approximately $1050.

“I bought an iMac Air that was $999, and I also bought school supplies, which were about $50,” Arinaga said.

Arinaga is upset that she hasn’t made any new friends yet, but the technical issues have also affected her usual academic routine.

Arinaga said, “I don’t really learn much since there are so many technical issues, and teachers are going way too fast.”

But she added, “I like how I do get more sleep since class starts at 9 a.m.”

Optimistic and Determined to Teach

For AP Human Geography teacher Megan Blash, she is optimistic about online learning. It has forced Blash to adjust to a new teaching style and has made her more creative and innovative with her resources.

“I mean, I’m a pretty optimistic person. So one way it has impacted me positively is it’s really forced me to grow and rethink my teaching, which I think is really good,” Blash said.  She continued, “It’s made me be innovative and creative, but I think in some ways, it’s been really positive, and I figured out ways to do things that are better than it was before.”

But she is working more than ever. With the ongoing support from her husband, Mike, Blash has been able to adjust to a new digital learning environment.

“It’s been an easier transition for me, but I also recognize that it’s a privilege that I have. It could be really difficult…” said Blash. “But my husband owns his own business and has a lot of flexibility. So we’re able to be a really good team, and he’s very supportive of what I need to do to be successful in my job.”

Blash estimated she’s spent $1,800 on school supplies, technology, and accessories. The biggest purchase she made was a new MacBook Pro laptop, along with the MacBook Air provided by SAUSD.

“I am very fortunate that the school provided a laptop. I just knew that having two was going to make me more effective and efficient,” said Blash.

Through all that, Blash feels fortunate.

Blash emphasized, “I feel so lucky to be a part of the Godinez community because I get a lot of support from other staff, a lot of good resources, and the kids that I get to work with.” 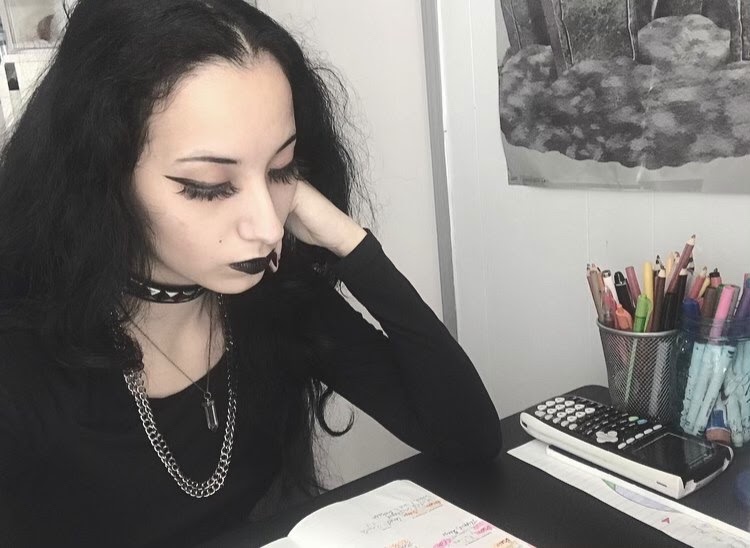 Senior, Lex Verdayes, looks over her school agenda to keep track of her assignments after a long day of school.

Senior Lex Verdayes feels demoralized with the course of online learning. It is not the senior year she expected. She’s adapting and is involved in various extracurriculars and clubs, but Verdayes misses in-person learning and her social life.

“What I miss most is eating lunch with friends, attending after school rehearsals, and having engaging talks with teachers after school,” said Verdayes.

Like many other students, Verdayes had to spend money on new materials and tools for the online school year. She estimates she spent at least $350 on: notebooks, a graphing calculator, a new desk, and chair.

Another challenge with distance learning for Verdayes are the multiple assignments and work all due online. With so much homework and different websites to manage, she believes that without physical papers she is continuously missing assignments.

But she has begun to increase her organization skills.

“I am using my agenda more than ever to keep track of all my work and have bookmarked all important websites such as Canvas and Google Classroom,” added Verdayes. 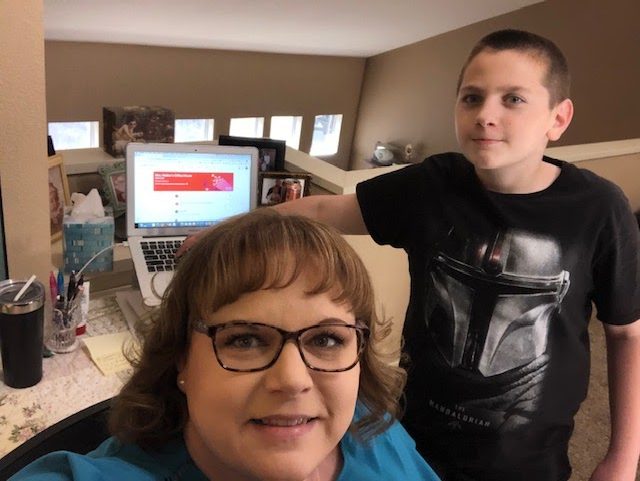 For World History teacher Sarah Walker, the start of online instruction led to an increased workload as a teacher and a mother of two boys. Her spending increased too, totaling so far $900. And Walker said “it keeps going up.”

These purchases make Walker’s teaching experience “more doable.” Physically, the chair she bought reduces the amount of back pain and helps her see more clearly.

Walker is on her computer “8 or more hours a day.” The multitude of screens makes her teaching manageable, daycare helps reduce distractions, and overall, the use of various technology systems makes it easier for her to work at home.

Walker adds that online instruction has affected her in many ways.

She states, “it is stressful. I work all the time. My husband is in our bedroom, working from home, so I sit out here in the hallway and just have a table.”

The coronavirus pandemic has set several challenges for SAUSD. Walker wants students and parents to know that teachers are doing the best they can. Whether it’s spending their own money or finding different resources to make a difference in their students’ education, everyone is trying their best.

“We are going to find a way for ourselves and our students to get through this,” added Walker.

Giovanni Hernandez sits in front of his online learning space which includes a new lamp for those late night deadlines.

Junior Giovanni Hernandez sits at his desk, missing the in-person learning. He feels that online learning has impacted him mentally than physically. Similar to what many students are experiencing, it has made him stressed more than ever.

“Online school has affected me, for starters, it has put a lot of stress on me since most teachers are giving a barrage of school work. I have not been able to adjust to online school as it was such a sudden change for me, I was so used to in person work,” said Hernandez.

Hernandez has spent around $900 this year mostly on clothing and extra school supplies to help with school work.

He misses every aspect of in-person learning from, staying after school, asking questions in class, and seeing his friends daily. Without the comfort of his friends, he is less spirited in class. Although he is fine just talking over them through his computer, it is not the same feeling as being in front and interacting with them.

“What I miss, honestly, is everything. I miss being able to ask questions in person, staying after school, and friends. Without being around the comfort of my friends, I feel as if I’m becoming a mindless robot, just waking up, and staring at a screen for 6 hours alone,” said Hernandez.

Distance learning has not been a pleasant experience for many students and teachers alike. With increased spending, a newfound sense of loneliness, and a longing for normalcy, the effects of COVID-19 have been felt by the GFHS community in more ways than one.

Each person has their price to pay for learning online; whether they can afford it or not is the real question.