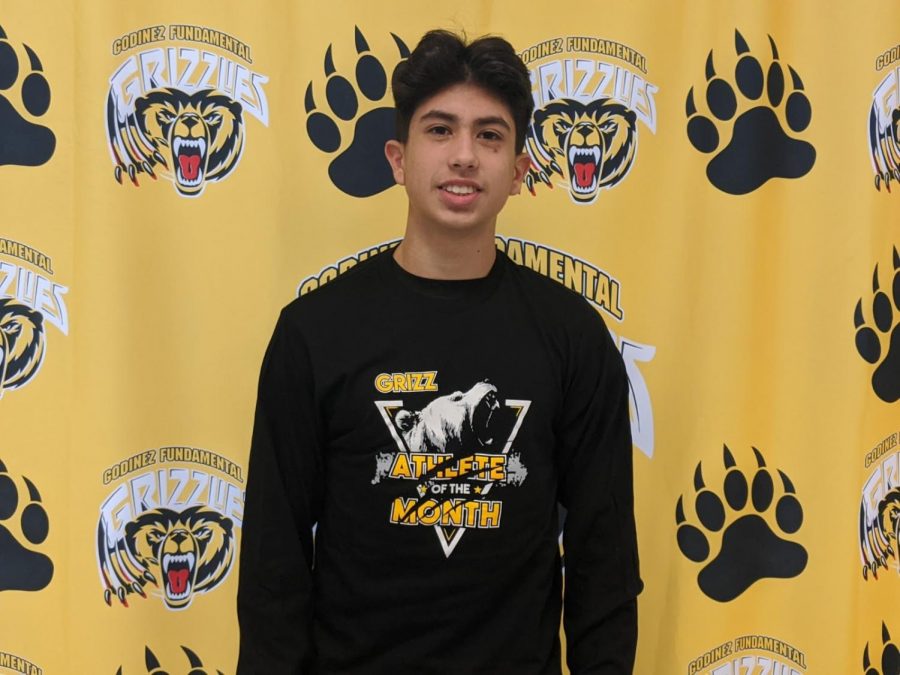 Freshman Paul Gonzales is being photographed and recognized as an Athlete of the Month for January for an outstanding job during the winter season of 2019-2020.

It’s all about working hard every day and not slacking off — and that’s all Paul Gonzales lives by.

Paul Gonzales is a Godinez Fundamental 9th grader in Varsity Wrestling. Gonzales has been participating in wrestling for 3 years now and he loves it. “I really wanted to do it in high school,” Gonzales explained. “I wanted to improve and keep on improving to see how good I can get.”

Being in a sport requires attention both inside and outside of school. It’s not easy being a scholar-athlete, but Paul manages. With a 3.66 GPA, Paul has been recognized as an athlete of the month for the month of January. “Paul wrestles extremely hard and performed very well over the winter break,” said Coach Corona. At home, Paul does workouts and practices his techniques.

Paul has a very strong, supportive family who always comes to his matches which leaves a big impact on him and his sportsmanship when it comes to participating. “He’s super nice,” said senior Jose Lobato, fellow varsity wrestler. “He never fights with anyone on the team.”

Wrestling is not an easy sport that comes with a lot of requirements and Paul never gives up. “Once he had this thing called a ‘cauliflower’ in wrestling,” explains teammate  Jose Lobato. “Coach forced him not to practice, but he had like this dedication to continue practicing because of how much he loves the sport,” Lobato continues. Paul shows determination throughout the season. 12th grader, Alex Argueta adds on, “He’s always asking questions to better himself [in wrestling],”

Paul demonstrates what it means to be an “Athlete of the Month”: strong, responsible, academically focused, and commitment. Barely being a 9th grader, Gonzales shows a bright future ahead of him. “He always works hard,” said Alex Argueta. “For a freshman, I’d say he’s off to a good start.”