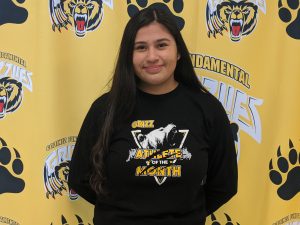 Senior, Natalie Flores as Athlete of the Month for Girls Basketball for the month of January.

On top of her extracurriculars, attending church school, and being on the girl’s varsity basketball team for all four years, senior, Natalie Flores, has also managed to maintain a 4.8 weighted GPA.

Flores plays guard on the Varsity Girls Basketball team. She has been playing basketball for ten years and played in middle school, so when it came to choosing a sport in high school basketball was the obvious choice. “It came naturally,” she said. Flores has also been influenced to pursue basketball because her dad also played in high school.

Because of her experience in basketball, her freshman year, she landed a spot on Varsity. That experience came from her playing on an outside team called the “Lady Monarchs” since 2nd grade. She still remains on the team to this day but takes a break when playing for the school. Girls Basketball Coach Alaman said,” Natalie is the team’s leading scorer this year, avg 10.2 points per game and played a pivotal role in bringing home the championship for the Lady Grizzlies.”

A typical day in the season for her starts at 2:30 pm when practice starts and goes to 4:30 pm. At practice, the team conditions, perform drills, and practice plays for games. While her diet doesn’t change much in season on game days Flores says,” I try to be healthy and I usually eat salads from Chick-fil-a.”

While playing basketball does consist of a lot of running and time, the team is the best part of playing for Flores.

As she learns from her teammates, they also learn from her. By being team captain she has to step us as a leader on and off the court and be there for the team when they need her. Whether that means helping someone understand a play or by just being caring to her teammates. Senior and teammate Bianca Diaz said,” Something I really love about Natalie is that even if we have a bad game or practice she sees our potential and our abilities, and gives us hope in a tough circumstance and advice to get better.”

“We build these new bonds each year, so I really like to play with them and learn.””

Even though being a team leader is a big honor, it does come with a weight. Flores has to maintain her cool on and off the court and be there for her teammates even though sometimes it feels like too much. Senior and teammate, Crystal Diaz said,” Her work ethic has always shown she was a leader, but there are times when she gets in her own head. She knows that she has to set the example.”

Her competitiveness on the court also shows in her school work. In all her four years at Godinez, she has never gotten below an A in any of her classes, and for that reason, she has the number 2 spot in the class rank. This year with all her duties as team captain she has also been juggling three AP classes and time heavy clubs like ASB Senate and the National Honor Society.

Besides all the pressure, basketball still makes Flores feel anxious and excited and brings out her want to compete. It all feels worth it because at the end of the day she not only gets to better herself but play with her friends and have fun.

“Basketball has helped me grow as a person and a player and has allowed me a distraction from any problems I have because they all melt away once I’m on the court,” said Flores.