Making a Splash with Commitment 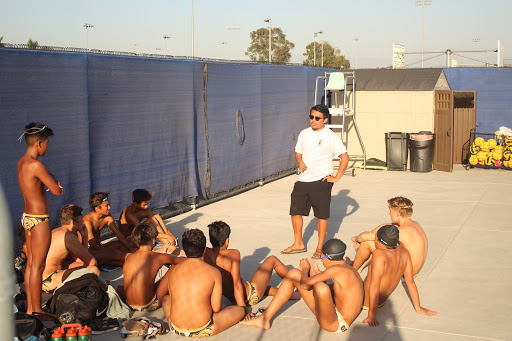 Coach Misael Cruz motivates his team before their game against the Garden Grove Argonauts.

The Godinez Boys water polo team has begun the year with a new coach and new hopes for growth.

Coach Misael Cruz is in his first year of coaching at Godinez. The Grizzlies currently have a record of 2-8 in another year without a pool. The lack of facilities at Godinez takes a real toll on everyone but for water polo, it brings a commitment to a whole new level.

Senior, William Feuerborn who is the team’s goalie joined water polo, “because I’ve done it all my life and I love being in the pool and not in the hot sun.”

When talking about the lack of facilities, Feuerborn said that the lack of facilities make the teamwork much harder, “Our guys are some of the hardest working guys I’ve ever seen, 3 of our juniors are taking several AP’s and are always tired but I always see them at the pool busting their butts. We do the best with what we have and we have some of the hardest working guys in school,” said Feuerborn.

Feuerborn continued, “You look at a school like Segerstrom and they have better practice hours and can work longer to work on a skill. If we had that type of facilities we would have a D4 (division) team easily.”

Coach Misael Cruz prepares for this first year of coaching at Godinez. “I coached one year before at Saddleback High school and have done a couple of clinics on my own in order to practice with players. I also look at old footage of this team to know what to work on after end game.”

This is Coach Misael Cruz’s first year of coaching at Godinez. “I coached one year before at Saddleback High School and have done a couple of clinics in order to practice with players. I also look at old footage of this team to know what to work on after each game.”

According to Cruz, “I believe it’s about building relationships as a team, getting everyone to work together, helping each other out and have fun”

Some of the benefits of having a pool for Cruz, “The practice would be a lot easier since it could start during the players’ 6th period. We could also run tournaments and help the sport grow from there.”

Sandra Jimenez, the parent of, was asked about the life between school and the sport that their son chose (translated from Spanish), “Always supporting my boy. Such as dropping them off or picking them up, no matter the time of day.” She continued, “Keeping the students updated with their grades and asking input from the parents and ask the students individually if they need any help.” The water polo team is known for always having late night practices. “‘My boy is always doing homework way later than usual and the practices are simply too late.’”

Jimenez added on the favorite part of being a parent of a water polo player, “I love that my boy is always fresh and doing a sport in the water and in the pool. Seeing the sport growing and seeing the athletes grow and get better over time.”

“My teammates make it a fun sport, and I wanted to do something different,” said Feuerborn.